You are here: Home1 / Museum returned to mint condition 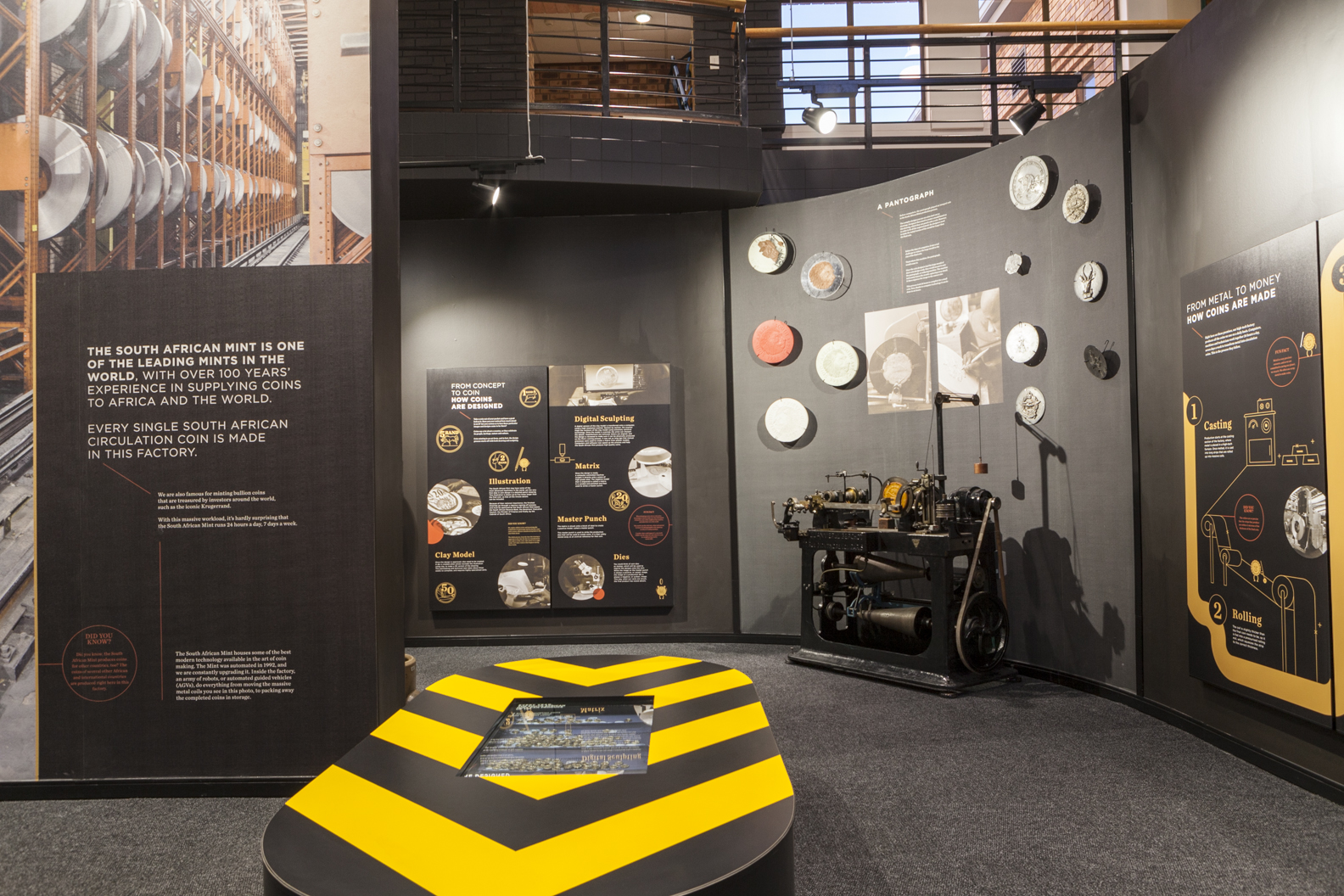 Centurion, South Africa – 15 October 2018: The South African Mint, a wholly owned subsidiary of the South African Reserve Bank (SARB) has reopened the doors of its museum and retail store following almost 4 months of extensive renovations. The SA Mint had recently embarked on a major revamp of its museum and retail store at the Old Johannesburg Road, Centurion site. The revamped visual impression is sleek and modern with the interiors rich in artefacts and information about the world of numismatics.

The museum’s two distinct themes, circulation coins and collectables recreate South African history from the perspective of coins. It offers visitors a unique opportunity to become familiar with the history of circulations coins from the earliest times up to the present day and at the same time take the visitors on the journey from metallurgy to money.

You are greeted at the entrance by a large metal coil, rolled sheets from which blanks are actually produced for the circulation coins. Through this new display to the old pantograph, a device used in the manufacture of dies – the museum showcases via illustrations the meticulous and creative process behind minting circulation coins.

Today, South Africa has over 26 billion coins in circulation. SA Mint is also one of the world’s top exporting mints and one of the proud displays is a map that showcases the countries the Mint either supplied or is suppling coins to.

A veritable treasure trove, the exhibits at the museum also include ancient coins dating back to the 1200s & 1600s which were discovered along the coast of Eastern Cape. The find is rare as there is no recorded history of coin usage in South Africa up until the 1650s.

“The museum is a wonderful educational opportunity and I would like to encourage everyone – from parents and children to institutions and tourists to explore the museum’s collection to learn about our fascinating tryst with money, one that started with bartering,” says Tumi Tsehlo, Managing Director, South African Mint.

“The exhibits can’t be seen anywhere in the country but at the coin museum. The interior is more than likely to pique the interests of children, slow them down so that they can learn about the many fun facts of coins, something even Google might not be able to answer.”

One of the permanent displays includes the “Oom Paul” Minting Press, named after the then President Paul Kruger, leader of the Zuid Afrikaansche Republiek (ZAR). One of the oldest presses in the world, it was built in 1891 and ordered by Kruger for use in the first mint established in Pretoria in 1892. “Oom Paul” was originally steam operated though modifications over the years have enabled it to work off electricity, and visitors can still see it in action to date.

“Coins shine a light on history so it’s our vision to use them to tell the story of South Africa and the South African Mint. From the discovery of gold in the 1800s to the county’s first black President, the mint’s coins have documented the ages like a true historian,” adds Tsehlo.

“The collection will increase your knowledge of coins that were used in South Africa and in addition provide unique insights into the influences on the present day monetary system.”

The refurbished museum also features the design pieces commissioned for the 50th anniversary celebration of the Krugerrand.

Visitors can buy coins from the on-site store which carries all the collectible coins produced by the Mint in 2017 and 2018. These include the centenary coins launched to commemorate the anniversaries of struggle veterans OR Tambo and Nelson Mandela as well as the world famous Krugerrands, which are also on display.

Kindly contact our sales office on +27 12 677 2482, or e-mail numismatics@samint.co.za for more information about the tours and to book a free guided tour.

About South African Mint – The South African Mint is the continent’s leading manufacturer of legal coin tender, as well as commemorative and rare collectible coins. With over 100 years’ experience in supplying symbols of value to the African and global markets, we pride ourselves in delivering products that represent our commitment to uniquely African design and supreme craftsmanship. We collaborate closely with our customers to develop distinct and durable monetary products that capture and preserve the heritage and pride of a nation. The South African Mint is a wholly owned subsidiary of the South African Reserve Bank (SARB), established in accordance with the SARB Act.

This website uses cookies to improve your experience while you navigate through the website. Out of these, the cookies that are categorized as necessary are stored on your browser as they are essential for the working of basic functionalities of the website. We also use third-party cookies that help us analyze and understand how you use this website. These cookies will be stored in your browser only with your consent. You also have the option to opt-out of these cookies. But opting out of some of these cookies may affect your browsing experience.
Necessary Always Enabled
Necessary cookies are absolutely essential for the website to function properly. These cookies ensure basic functionalities and security features of the website, anonymously.
Functional
Functional cookies help to perform certain functionalities like sharing the content of the website on social media platforms, collect feedbacks, and other third-party features.
Performance
Performance cookies are used to understand and analyze the key performance indexes of the website which helps in delivering a better user experience for the visitors.
Analytics
Analytical cookies are used to understand how visitors interact with the website. These cookies help provide information on metrics the number of visitors, bounce rate, traffic source, etc.
Advertisement
Advertisement cookies are used to provide visitors with relevant ads and marketing campaigns. These cookies track visitors across websites and collect information to provide customized ads.
Others
Other uncategorized cookies are those that are being analyzed and have not been classified into a category as yet.
SAVE & ACCEPT
Scroll to top